A hiker since she was old enough to toddle down the Appalachian Trail with her parents, Sandra Friend is known as Florida’s hiking expert, with more than 5,000 miles on foot throughout the state. Sandra began her travel writing career in 1996 penning articles for newspapers and magazines. 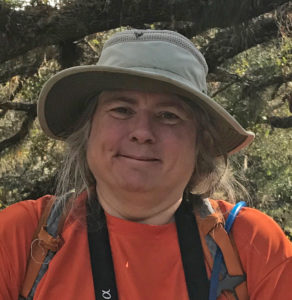 A former board member of the Society of American Travel Writers and the Florida Outdoor Writers Association, and a member of the Outdoor Writers Association of America, she is the founder of FloridaHikes.com, a popular website with more than 2.6 million impressions a year and more than 70,000 social media followers. An avid travel photographer, Sandra brings the world along on her travels through multiple social media channels. Sandra and her husband John Keatley work as a team on multiple websites, books, and other creative projects.

Sandra started her career as an author writing nonfiction books for children. Published in the late 1990s, her first titles were for publishers like Twenty-First Century Books (Lerner) and Charlesbridge, covering science and history topics for the school and library market. She debuted her first trail guide, 50 Hikes in Central Florida, with The Countryman Press in 2001. The Florida Trail Official Guide and Along the Florida Trail, both with Westcliffe Publishers, soon followed. She has worked with more than a dozen major publication houses and has served as copy editor and advance reader for other author’s books.

Sandra has written more than 40 books since 1998, including multiple revised editions of six of her guidebooks. A full bibliography of Sandra’s work is available on her website, along with a list of her writing awards.

Wading through swamps, diving for scallops, and crawling into sinkholes: it’s all in the fun of research for author Sandra Friend. After losing her younger sister to cancer in 1999, she closed the door on her career in software design in Pittsburgh and opened a new one as a writer, drawing on her lifelong love of hiking and travel. Settling back into Florida, she quickly became known for her passion for the outdoors through her trail guides that lead others to connect with natural Florida. After writing her first five books on hiking Florida, she spent five years with the Florida Trail Association as Communications Director. In 2006, she launched FloridaHikes.com. It is now the state’s top hiking resource, with more than 2.6 million impressions annually.

Known as Florida’s hiking expert and a respected name in travel, Sandra has authored more than 40 books, of which 40 have been published. She has served on the boards of the Florida Outdoor Writers Association, the Society of American Travel Writers, and Friends of Florida State Parks, as well as an advisor to Florida tourism marketing through VISIT FLORIDA committees. Sandra has hiked and backpacked more than 5,000 miles in Florida, GPS or measuring wheel in hand, while researching trails for her books and website. She has completed the entire Florida National Scenic Trail on foot, including all side trails, more than 1,500 miles in all.

On a 109-mile hike around Lake Okeechobee in 2011, Sandra met her future husband, John Keatley, and they took off on a thru-hike of the Appalachian Trail. While they didn’t finish the hike they’d planned, they found their sweet spot for teamwork on guidebooks and other creative projects. In 2014, John founded the Florida Trail Hikers Alliance, an educational nonprofit growing a hiking community around the Florida Trail, one of America’s National Scenic Trails. Sandra was deeply involved with getting it off the ground; they have both since retired from the organization and continue to serve as advisors to the new volunteers moving it forward. They live on the Space Coast of Florida.